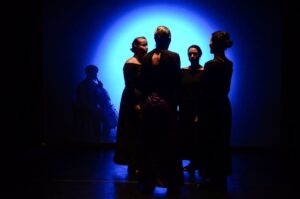 The performance of the Nyári Mozi Színházi Közösség was inspired by 88 extraterrestrial conversations with supernatural beings. In 1943, when the truth could only besensed and its presence were obscured by the darkness of the merciless war, four young Budapest artists, Lili Strausz, Hanna Dallos, József Kreutzer and Gitta Mallász, had conversations with Angels in a closed house in Budapest. Of the participants in the seances only Gitta Mallász survived the Second World War. The document Talking with Angels, which she wrote down, but published decades later, interprets the message of the artists who were strong in their commitment and endure to the end. All feelings of unworthiness cease as soon as we feel responsible for ourselves as well as for the whole of Creation.